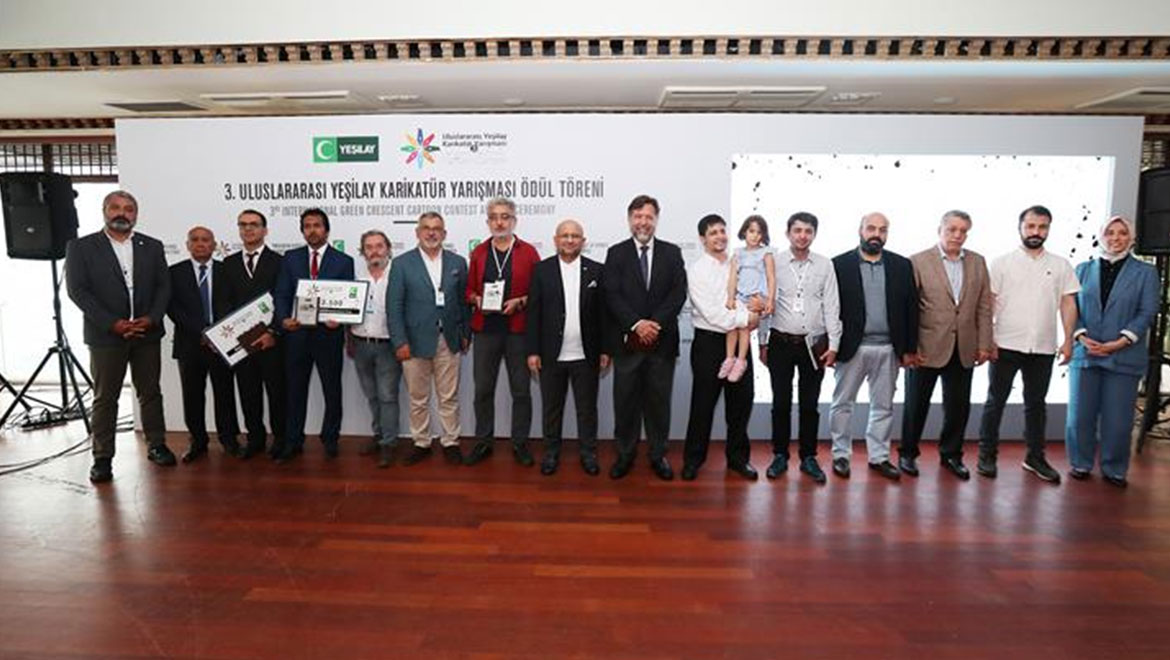 Organized by the Green Crescent in order to attract attention of the world, of our country and especially of the youth against addictions, and to raise awareness with the universal language of cartoon, the 3rd International Green Crescent Cartoon Contest Award Ceremony was realized in Sepetçiler Pavilion.

In the contest organized with the theme "Preventive Effect of Sports Against Addictions," in addition to subheadings such as drug, tobacco, alcohol, technology, gambling addiction, the harm addiction does to people and society is mentioned with the works of the artists. The award ceremony was organized in the evening of 21 June 2019 at Green Crescent Headquarters Sepetçiler Pavilion.

414 Cartoonists from 51 countries participated with 787 works

Winners of the International Green Crescent Cartoon Contest organized by the Green Crescent in order to attract attention of the world, our country and especially the youth against addictions, and to raise awareness with the universal language of cartoon, were presented their awards. In the contest, with 787 cartoons of 414 participants from 51 countries, in which the relationship between sports and addiction was addressed with a humorous approach, the first place prize was presented to Aşkın Ayrancıoğlu from Turkey.

In the contest in which a total of 6 cartoonists were placed in total from İran, Cuba, Brazil and Turkey, the other 5 successful works' owners were Satılmış Akın from Turkey, Amir Khaleghi from İran, Khodayar Naroei from İran, Bradya İzquierdo Rodriguez from Cuba, and Claudio Antonio Gomez from Brazil.

In the ceremony in which the opening speech was given by the Member of Green Crescent Scientific Board and İstanbul Şehir University President Prof. Dr. Peyami Çelikcan, Brazil Consul General Paulo Roberto Caminha De Castilhos Franca received the award on behalf of the Brazilian Artist, Cartoonist Association President Metin Peker, and cartoonist Şevket Yalaz attended.

Awareness with the universal language of humor

Indicating that they are executing protective, preventive, awareness and consciousness raising activities in addition to topics such as tobacco, alcohol and substance abuse, and contemporary topics such as gambling and technology addiction, Green Crescent President Prof. Dr. Mücahit Öztürk continued: "Since the 2000s, important functions and responsibilities were added to Green Crescent's heritage. With its professional volunteers, Green Crescent Consultancy Centers spread out across the country, accountability and transparency, reached to an exemplary corporation structure and insight. We are very happy today, for we are gathered for one of our international projects. Today we are realizing the 3rd International Green Crescent Cartoon Contest's award ceremony. We thank our 414 artists who explained the serious subject of fighting against addiction with their drawings' humorous language and universal messages, for their great interest and for submitting their most precious artworks. From now on they are Green Crescent volunteers for us."

Addiction from the perspective of Global Cartoonists

Highlighting addiction is a serious problem threatening the youth and ripping them apart from a healthy life in our country and in the world, Green Crescent General Manager Sultan Işık continued, "Organizing in 52 countries around the world, we are sharing our experience with other NGOs. With our globally active efforts and exemplary projects, we have always succeeded in being a pioneer in this area. With the contest we are diversifying our activities with the aim of attracting public opinion to this important issue and raising awareness. With our International Green Crescent Cartoon Contest, we have included many precious cartoonists from all over the world. With the humorous approach of cartoonists who are very strong in affecting the society and especially the youth we are increasing the value of our processes." Sultan Işık thanked all participant cartoonists for the sensitivity they showed for fighting against addiction.