Media
Drug problem is discussed at an international level...
27November2018 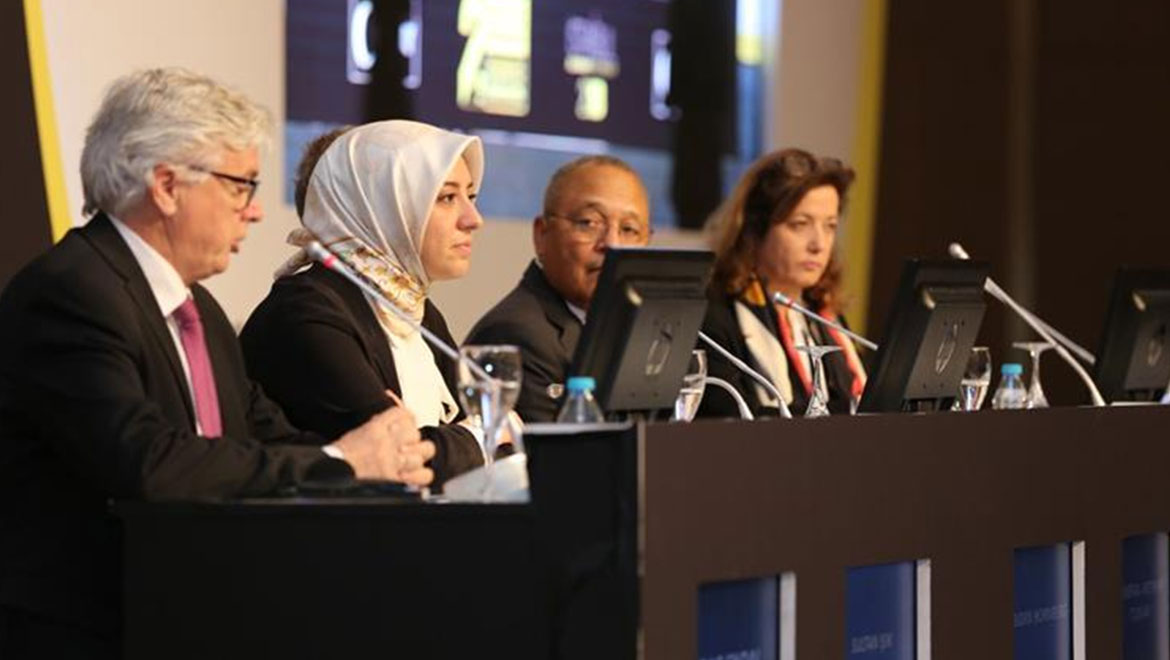 Drug problem is discussed at an international level

“The 2nd Symposium on International Drug Policies and Public Health" organized on 26-27 November by the Green Crescent, which has been active for 100 years with its mission to fight against all kinds of addictions, hosted national and international speakers on the second day.

IŞIK:"The reintegration of an addicted person into society is not only a concern of an organization. It is possible with a happy society and social understanding and acceptance."

Remarking that the most important point to make society shoulder responsibility for the problem including policy development is to ensure the involvement of NGOs, Green Crescent General Manger Sultan Işık said in her presentation;"The reintegration of an addicted person into society is not only a concern of an organization. It is our problem. We have to be a part of the process in cooperation with NGOs. Even if you make progress with treatments by imposing certain sanctions, you cannot help society to accept them as individuals once again or you cannot support them only by yourself to make easy to maintain their lives when these people decide to be a part of society. It is possible with a happy society, social understanding and acceptance."

Sultan Işık underlined the activities of the Green Crescent:"We have reached 13 million students and 2 million adults with Addiction Training Program of Turkey that we conduct within our prevention strategy as Green Crescent. We have been carrying out Life Skills Training Program intended for 7th and 8th grades as a part of prevention and we aim to teach our children how to say"No". Program on Addiction Intervention in Schools helps us to intervene children who have tried but not developed addiction. On the other hand, we provide free psycho-social support services with Green Crescent Consultancy Centers (YEDAM). 37 thousand and 600 hundred people have called our hotline and asked for support between 2016 and 2018. YEDAM has been also maintaining our rehabilitation services with workshops including handicrafts, gastronomy, graphic design, sports and healthy life. Thus, we aim to improve professional competencies of clients and make them productive along with social adaptation."

Esbjörn Hörnberg, IOGT: “We have been working to establish public health. There are serious harms of illicit drugs. The harm of drug use for young people is much greater. It destroys their mental health and affects brain development in a negative way. If one in 16 people try cannabis, he/she will definitely become addicted. And this lowers the IQ level by 6.8 rate. On the other hand, cannabis use doubles the possibility to develop mental disorders. Illicit drug use harms society and personality of individuals. While its constant use lowers individuals’ competence, it destroys their role within the family and causes social isolation for a long term by harming their friend relationships. Socio-economic aspect and economic burden of the harms are also serious. It wastes social capital. While leading to violence and crime, it lowers productivity."

General Arthur T. Dean, CADCA: “There was a crack epidemic in America in 1980s. CADCA was hereby established. We advocate for education, research and public policy within the government. We organize international programs, and particularly focus on young people. Today, we are present in 30 countries. In 2016, we lost 72 thousand people because of drug overdose. The numbers in 2017 is unfortunately much higher than this. We believe that society-based coalition is the best solution. There are approximately 12 sectors such as parents, teenagers, business world, organizations providing services for teenagers, law enforcement officers. I believe that it will be useful to deal with the work entirely."

Mirella Dummer Frahi, UNODC Civil Society Team: “As UNODC, we are responsible for policy and public affairs. Our role is to gather NGOs and to help them to give voice in United Nations. Our duty is to speak with one voice. For this reason, we work as an organization under a single roof at policy level. In accordance with Sustainable Development Goals of 2030, our duty is to encourage society and support the fight against drug. At this point, UNODC is also responsible for monitoring the progress of treatment interventions."

NGOs shared their experiences in the fight against drug.

Nail Aykan, ICV: “Australia is an immigrant-receiving country and it also has minorities. Their experiences are different…There are 200 year-old past of the population reaching 25 million and 100 year-old existence of Federation. First Muslims came from Indonesia and Afghanistan around the 1500s. 2,6 percent of the total population… It is a secular state. 55 percent of the population is Christian. 30 percent of the people are atheist. Muslims are the third group. Two out of three of the Muslims living in Victoria are in prison. The sentence of two out of three people in prison is because of drug. On the other hand, the number of suicide attempts per day in Australia is 8. More importantly, 200 people commit suicide every day. Victorian Alcohol and Drug Association applied for governmental funds in 2016. With evidence-based practice, it received 1.5 million dollars as a fund. Islamic Rehabilitation Center for Alcohol and Tobacco Addiction was established. It is impossible to fight against drug without training, employment and intervention. When we talk with young people, we learn that: Alcohol, tobacco and drug are some sort of a way to escape. They cause change in them. At this point, youth experience identity problems in this situation."

Tajudeen Abiola, Nigeria Green Crescent: “West Africa is a place where multiple physical areas exist. 5 percent of the world's population live here. There are many problems related to people in the region. When we look at the addiction experience, we see that illicit drugs are obtained by the local production. The natural structure offers South Africa an opportunity to reach these products. Some areas are in transit. And this whole cycle cause addiction crisis. Man-made factors are the main reason of this traffic in the region. It also triggers drug-related crimes in the community. If dealing strategically with this drug problem and solution of the problem are accomplished, then it will benefit the community. Africa has been making efforts in this regard. And it also works with the other countries in the region. On the other hand, NGOs should take an active role."

Shuhaida Adam, Green Crescent of South Africa: “Africa has been economically growing. There are climate-based challenges. Global economic crises affect many processes as well. There are many NGOs that are active in different areas. NGOs in Africa try to implement the model of sustainable support. North America has the highest rate in drug-related deaths. Africa, unfortunately, following North America. The economic cost of drug addiction is 2.7 billion dollars. We have been working to reduce this, but we have difficulties in bureaucracy. By increasing our cooperation with other NGOs and institutions, we try to reduce this loss."